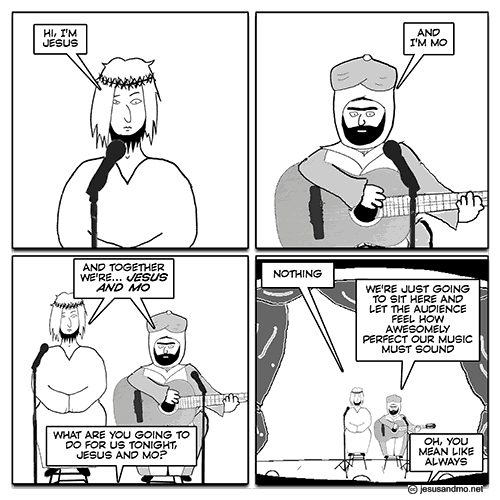 This is the winning entry in the J&M script-writing competition. Sastra’s entry stood out from among a strong field for its combination of profundity and brevity. Congratulations, Sastra! Your signed book will be winging its way to you soon.

The competition was much harder to judge than I’d imagined. Honourable mentions go to Darwin Harmless, Max Saturation, Matthew R, Alejandro, Phil A, Linda A, E Jackson, and Preston McD.

Thank you to all who entered!

BTW, a few people suggested leaving the last panel blank, which does create quite an eloquent silence, but as it didn’t involve any writing – and many people had the same idea – it was arbitrarily disqualified as an entry.

CHEAP BOOKS: Lulu is offering 30% off on books until Dec 17 with the code
FAMILY30
Have I mentioned there’s a new J&M collection out?