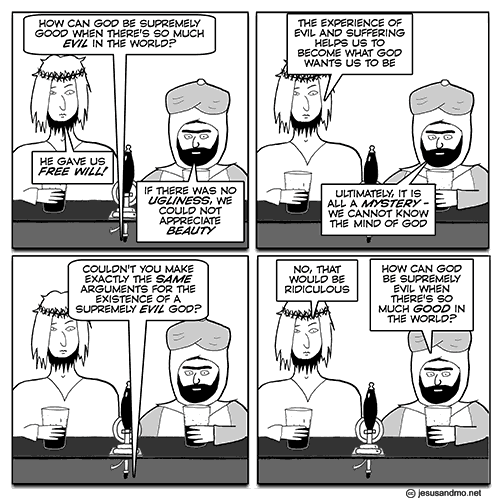 An old philosophical one, summing up Stephen Law’s God of Eth argument against theodicy. Just to keep things ticking along while this storm blows over.

If you haven’t signed the petition against the LSESU, and you want to, it’s here:
http://www.change.org/en-GB/petitions/jay-stoll-lse-sabbatical-officers-apologise-for-the-blatant-attack-on-free-speech-mistreatment-of-lse-students-at-freshers-fayre

If you fancy printing yourself a “provocative” t-shirt, there are hi-res images available here:
http://t.co/UtLBXE2wow
http://t.co/Kk8GxXGR43
http://t.co/dHjXKJQkBT

Or you could just buy one from the CafePress shop.

Thanks for reading Jesus & Mo.